In June 2017 me, my girlfriend and our dog went on a roadtrip through Scandinavia. Our ride is our home for the next 4,5 weeks.

The Plan: Drive from Germany, over Denmark to Sweden, up to Lapland, Northern Norway and all the way back to Oslo and Germany, through the mountains and fjords.

Some thousands of kilometeres and a sun that is not setting anymore, north of the arctic circle.

Watch the Photography VLOG  from our Trip

At first we wanted to buy an old camper, but when I found out that i could just pack a “mobile camper cabin” on the back of my VW Amarok pick up, I teamed up with Nordstar and the wohnkabinencenter.de in Germany. They rented me the cabin for the trip and we were ready to go with 4×4! 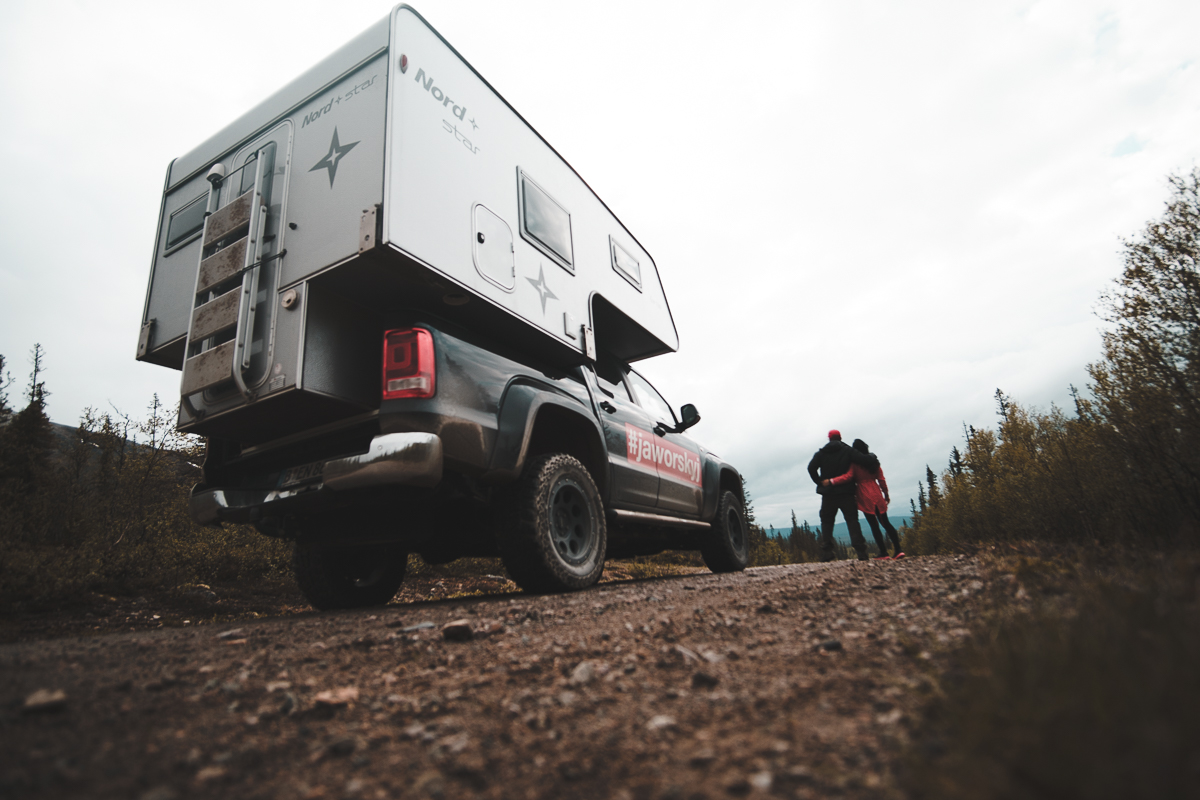 Our 4×4 VW Amarok with Nordstar Cabin

We started our way from the north of germany where we filmed a new episode of my german tv series “Der Abenteuer Fotograf” and decided to drive over the bridges of Denmark to Malmö in Sweden.

The Distances are quite long and we underestimated them a bit, because in germany you usually can drive on the autobahn straigth with at least 100km/h (more wasn’t possible anyway because of the cabin on the back and a height of 3,10 meters)

In Sweden you can drive 100 km/h as well, but often there are slow lorries, farmer or speed limit and cameras that make you slow down.

We decided to only drive 200km a day to see more and have an easier time traveling. We were not in a rush and planned 4-5 Weeks for the whole trip. We took the longer road through the middle of the country, because Norway was full of water and the sea anyway and we thought that the inner of Sweden might be more remote and interesting to roam around.

Our Route through Sweden

My favorite Places in Sweden to photograph

A Wildlife Park with predators only. Kind of Jurrasic Park like feeling with huge space in a forest like enviroment. Awesome to watch and photograph. 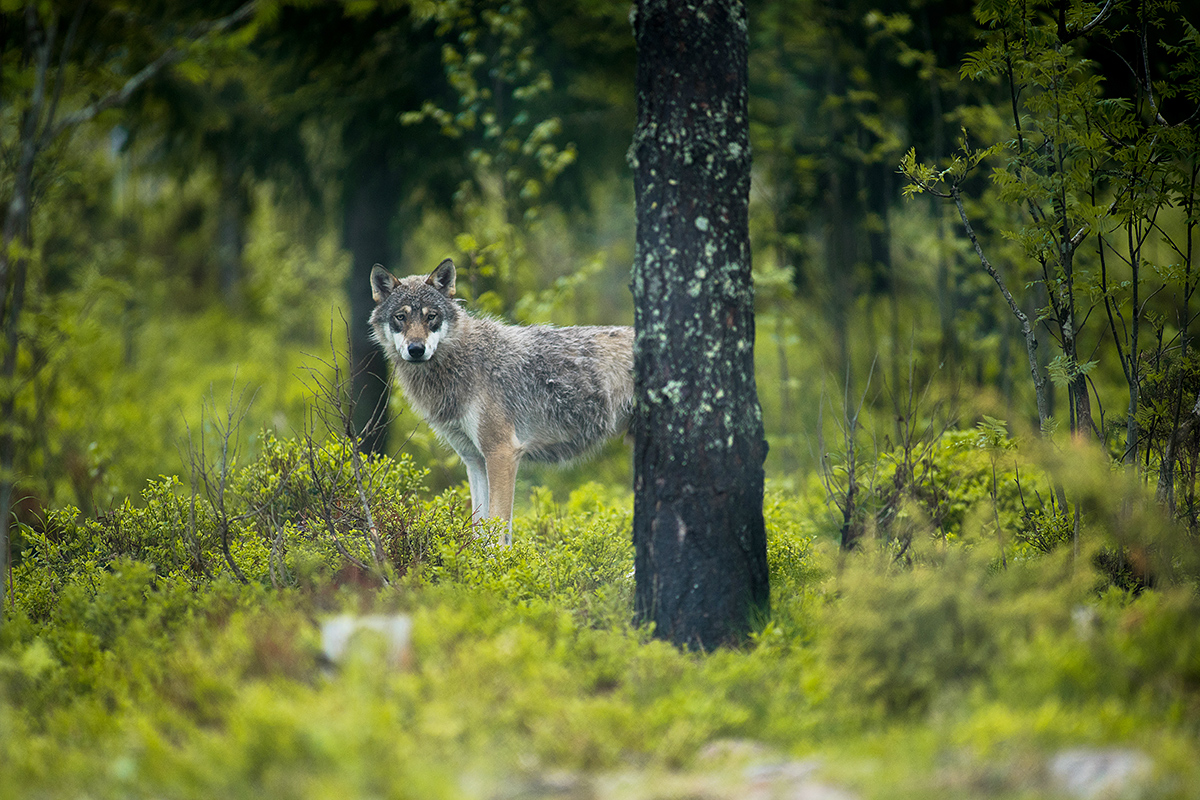 A big waterfall near Åre with a Camping Place right next to it. Spend here two days with great weather, friendly staff and great photos. 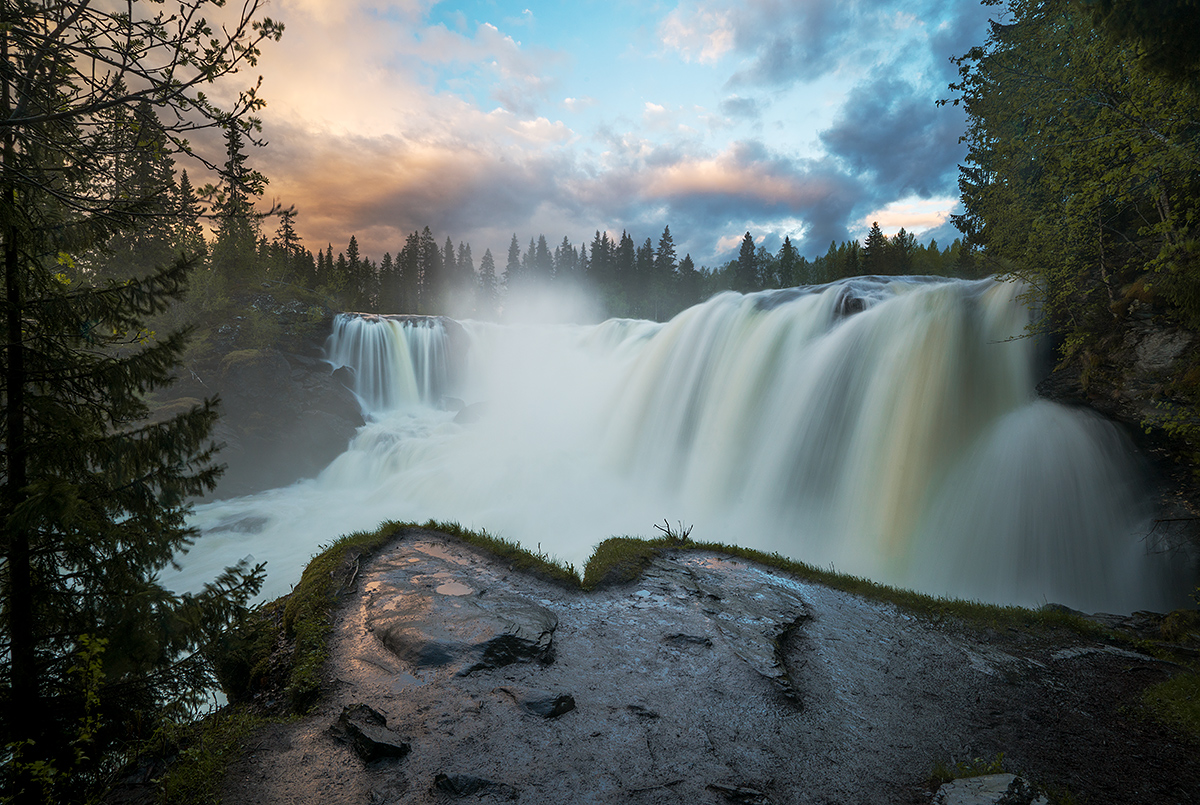 Biggest waterfall in Sweden also next to Åre. We had bad weather and tons of water. But anyway, pretty spectacular. 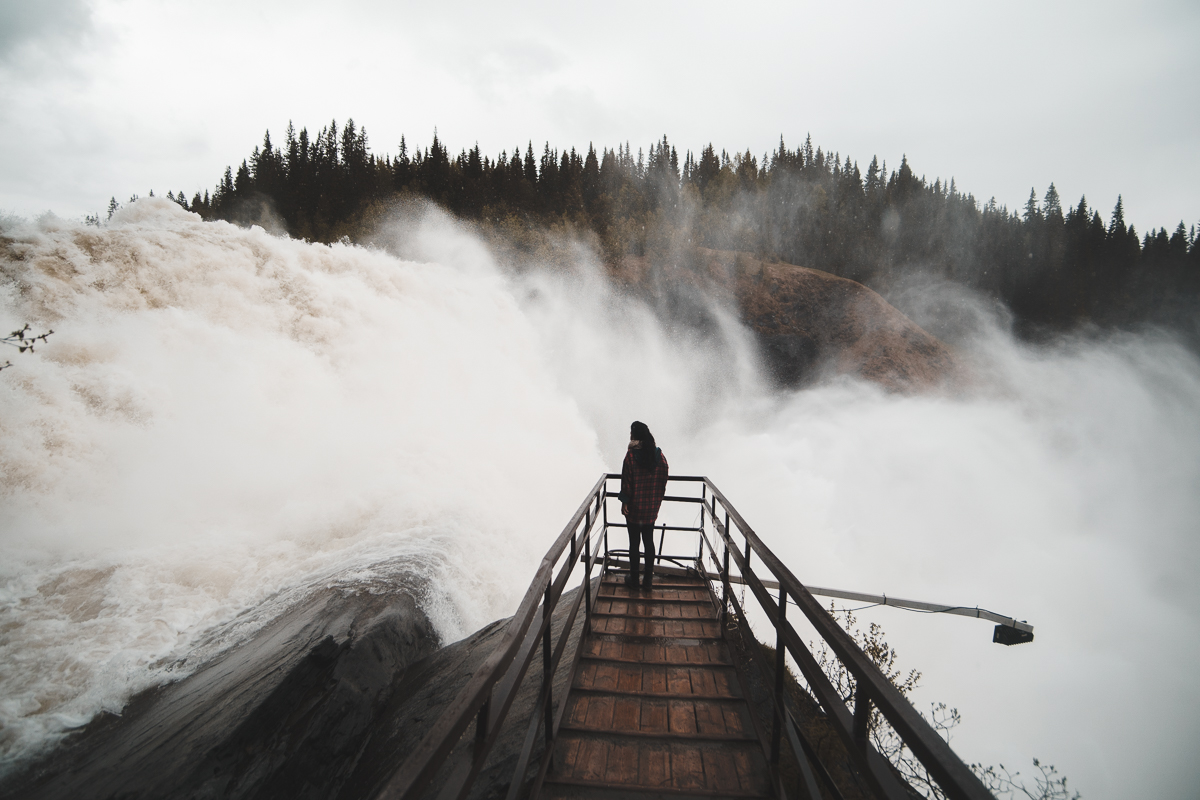 Around this famous National Park you can find plenty of remote nature to roam and explore and of course take photos of. 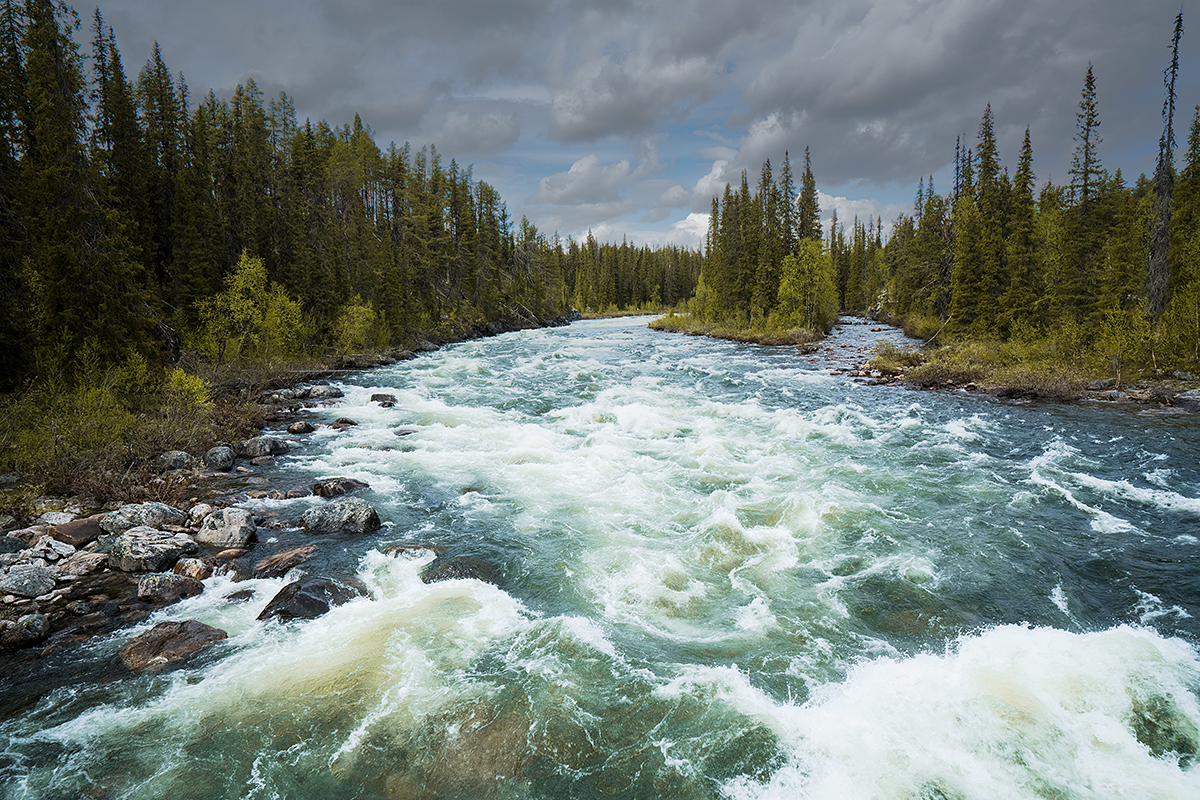 The south of Sweden was not so interessting for us. Pretty crowdy and a lot of “no camping” signs along the lakes. The further north you drive the remoter it gets and the more beautiful and enjoyable nature gets. Excactly what we’ve been looking for.

A long side the road are tons of lakes, forest and when you are lucky, animals to spot. Most I liked the North of the Country which reminded me of Canada.

Here you can see herds of reindeer along the road. So drive carefull around here. They are around all day even in broad sunlight. 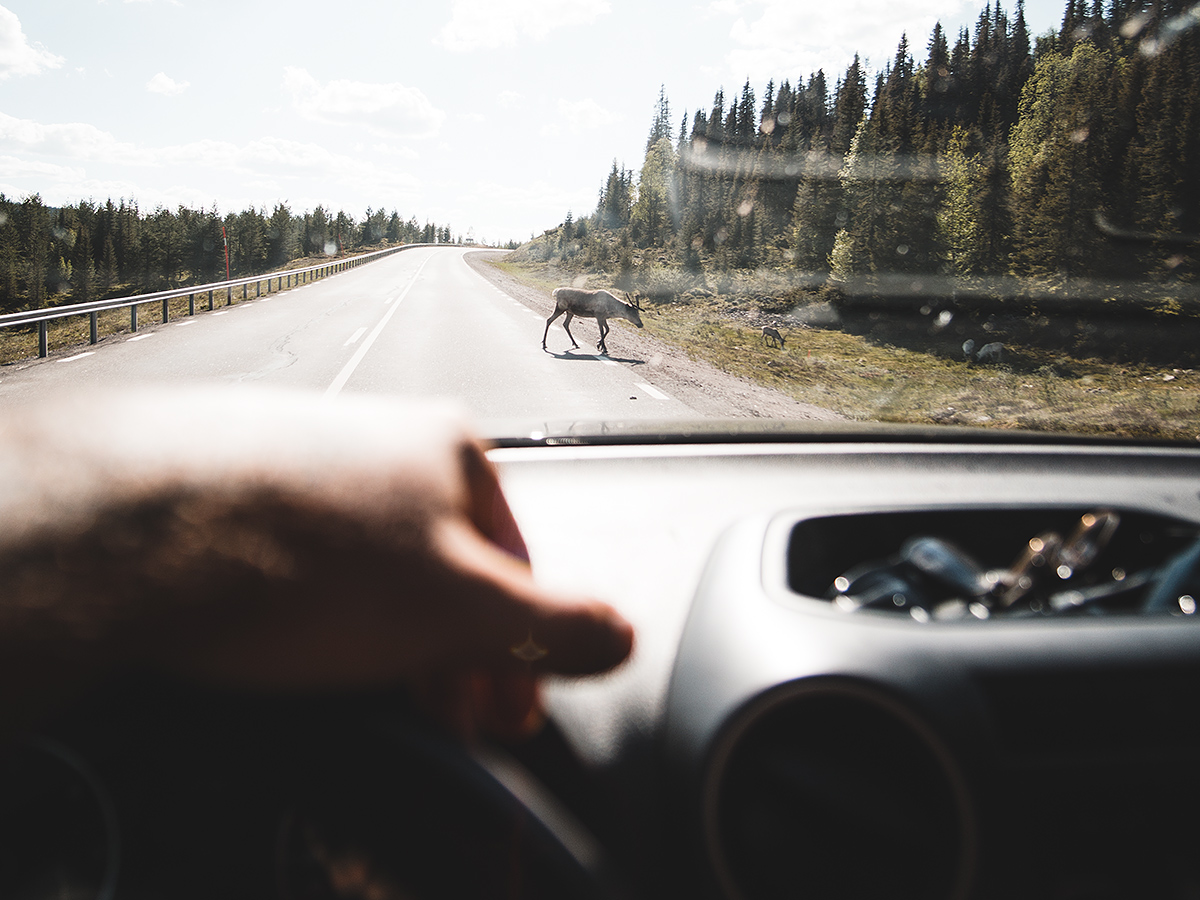 The weather was pretty bad in the south and middle with a lot of rain and temperatures around 15°C.

In the North we had plenty of sun with temperatures around 20°C which felt quite comfortable.

Sarek National Park was one of our goals, but we could not visit it because of the long 3 day hike to get in and out. In June there are also still parts with lots of snow, that you can’t get through easy. But still on my list for a longer trip. 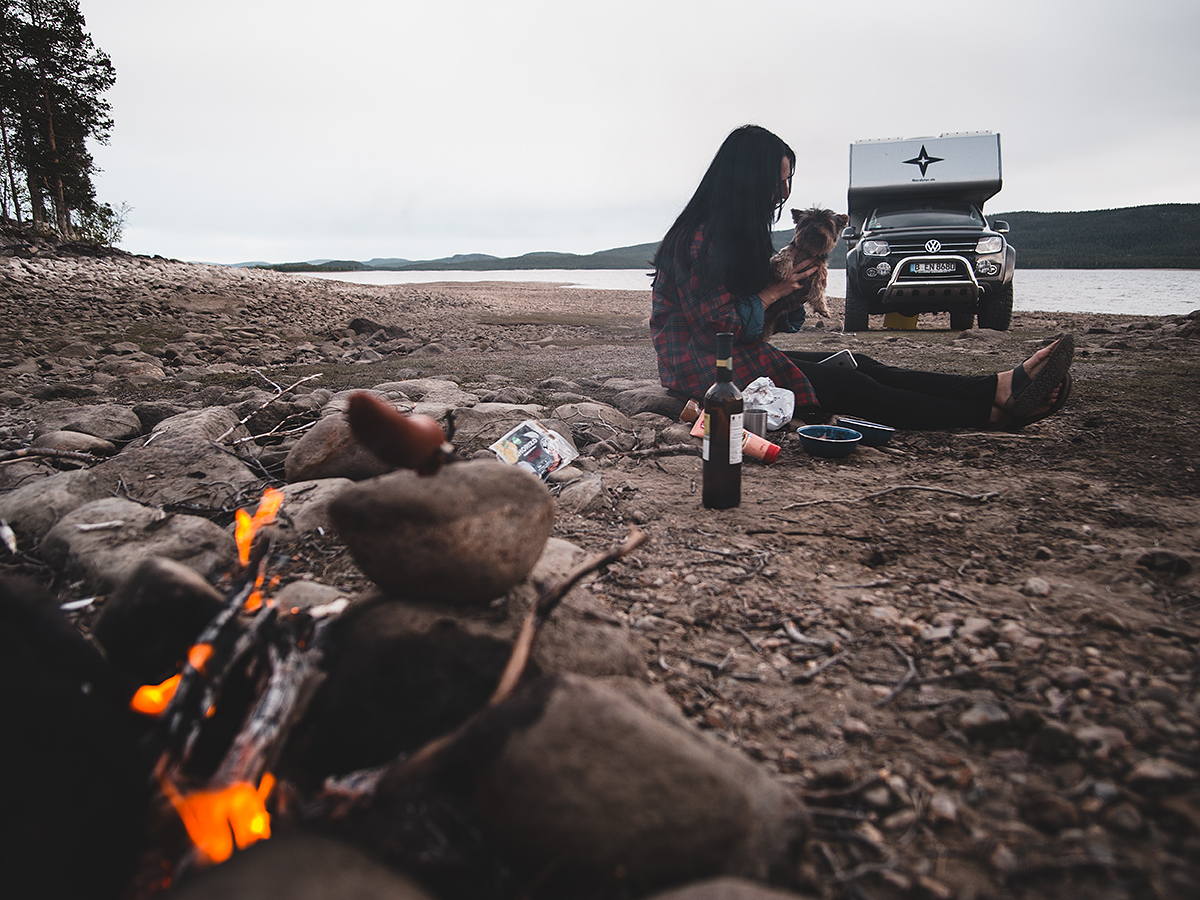 Barbecue at a beach in Lapland Sweden

From Northern Sweden we moved over to Northern Norway. We are allready North the Arctic Circle. In the End of June that means: Sun is not setting. Great photography light all night long.

Our Route through Norway

Our first stop was Senja, a beautiful Island on top of the Lofoten. When we crossed the border, there still was snow next to the road and temperatures were at night around 5°C and at day around 10°C in the valleys.

Senja was totaly green at sea level with rainforest like nature but still snowy up the mountain roads. pretty surreal feeling but great to take tons of photos. 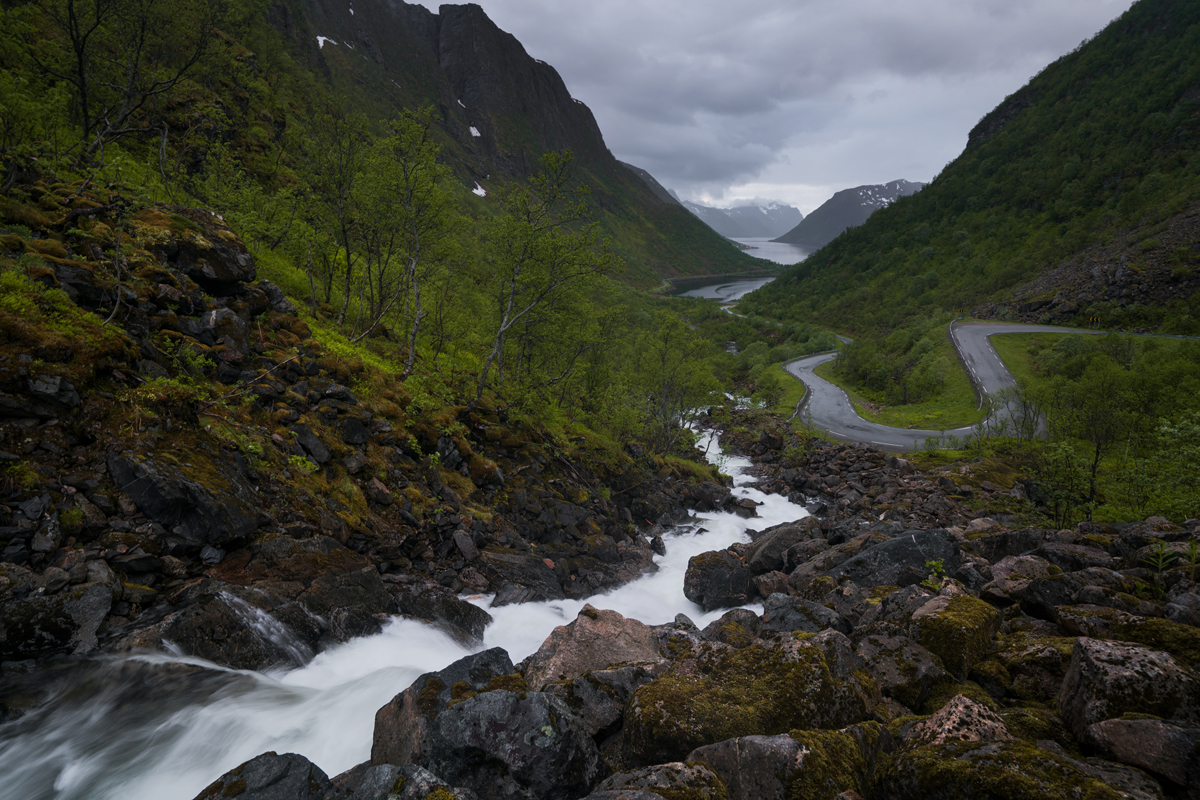 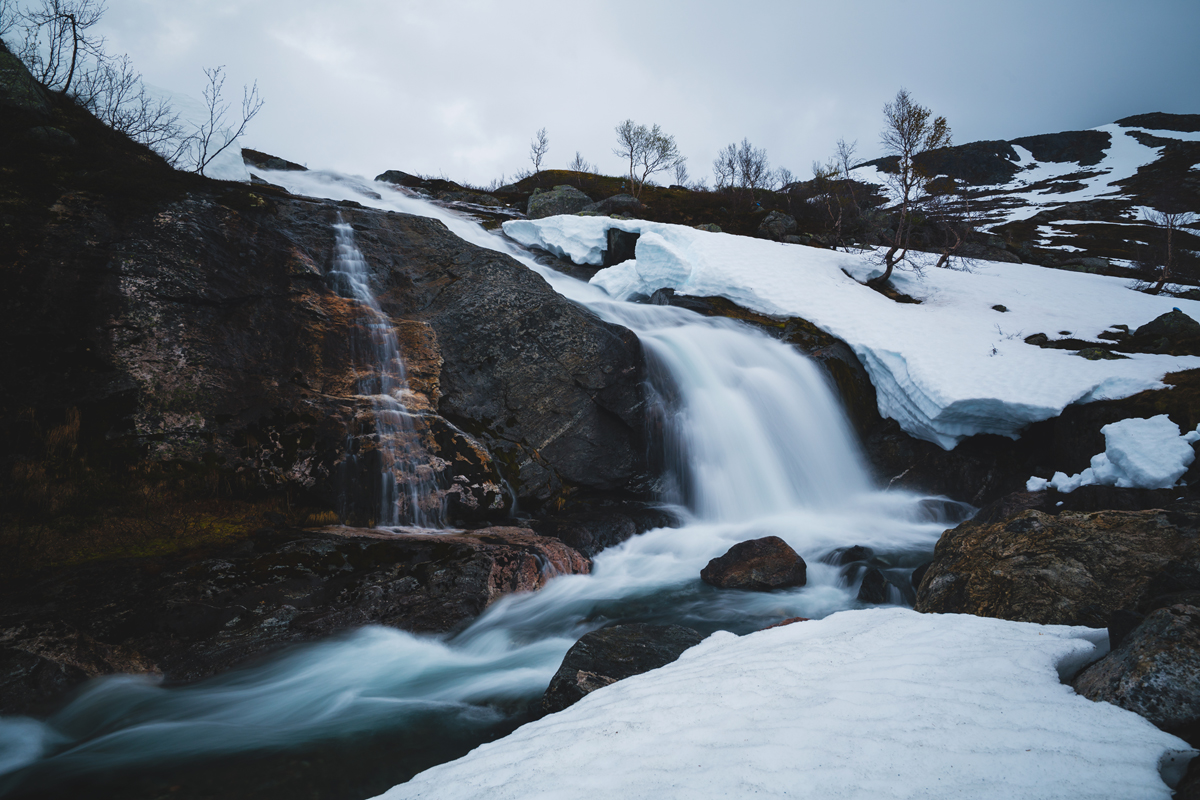 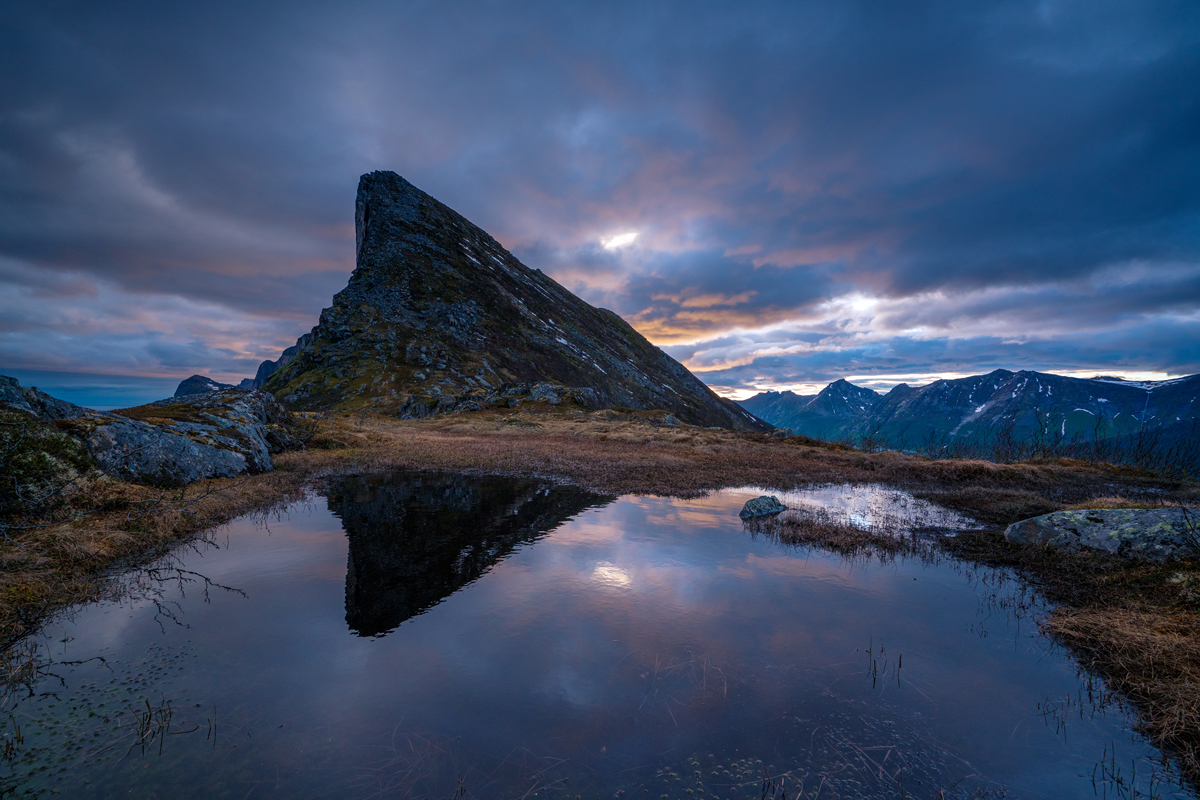 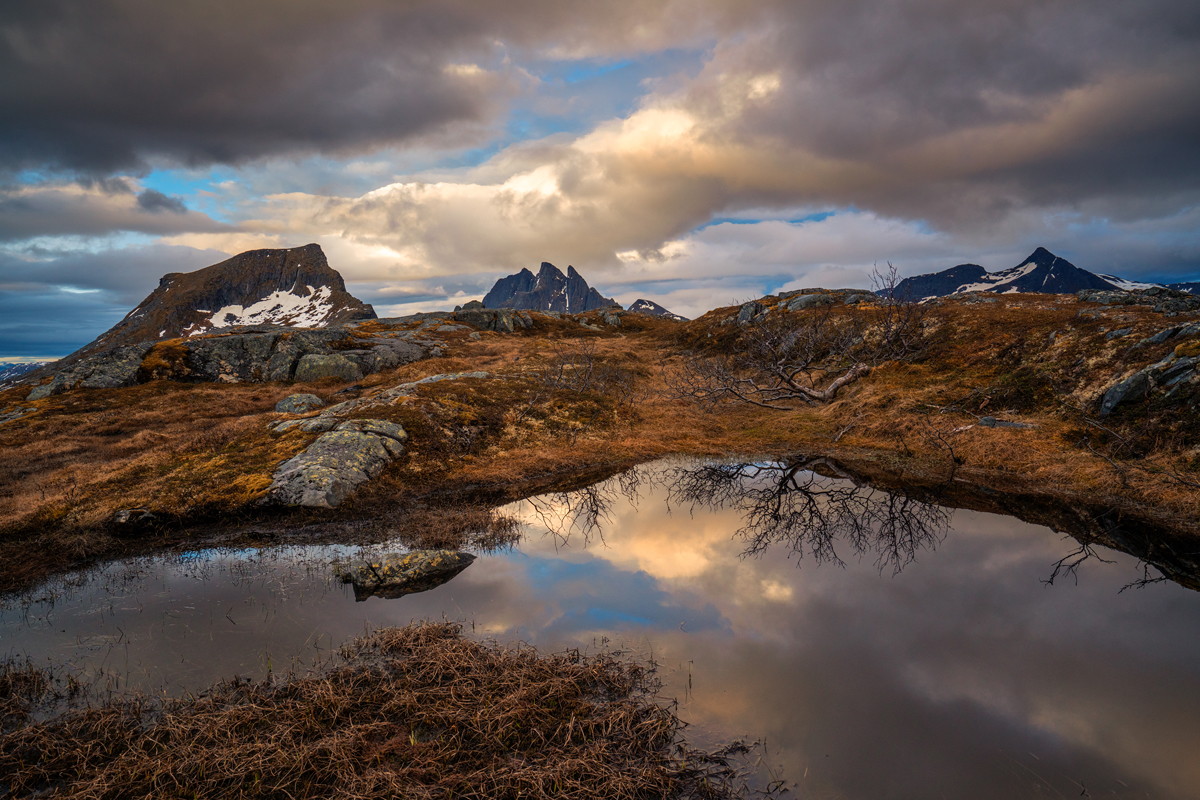 At day it was raining so we decided to sleep and chill for the day and go out for hikes at night. We usually started around 10pm and went out till 4am.

The light was amazing and also the weather. It’s like photographing a sunset for 4 hours. Epic light and atmosphere the whole night.

We then took the ferry a few days later from gryllfjord to andenes on lofoten.

Our goal there: The Reinebringen.

I am at Lofoten in Winter a lot with my photography workshops, but never was there in summer.

Compared to Senja there are not many trees or forests, but still beautifull with all the clear water and mountains.

We had some great sunny weather and went up to Reinebringen at around 10:30pm . The Hike itself is not long or very high, but dangerous as f***! Super slippery and no real track. (The main track is closed due to a landslip and the ongoing construction work) It’s super steep and a serious risk hike. 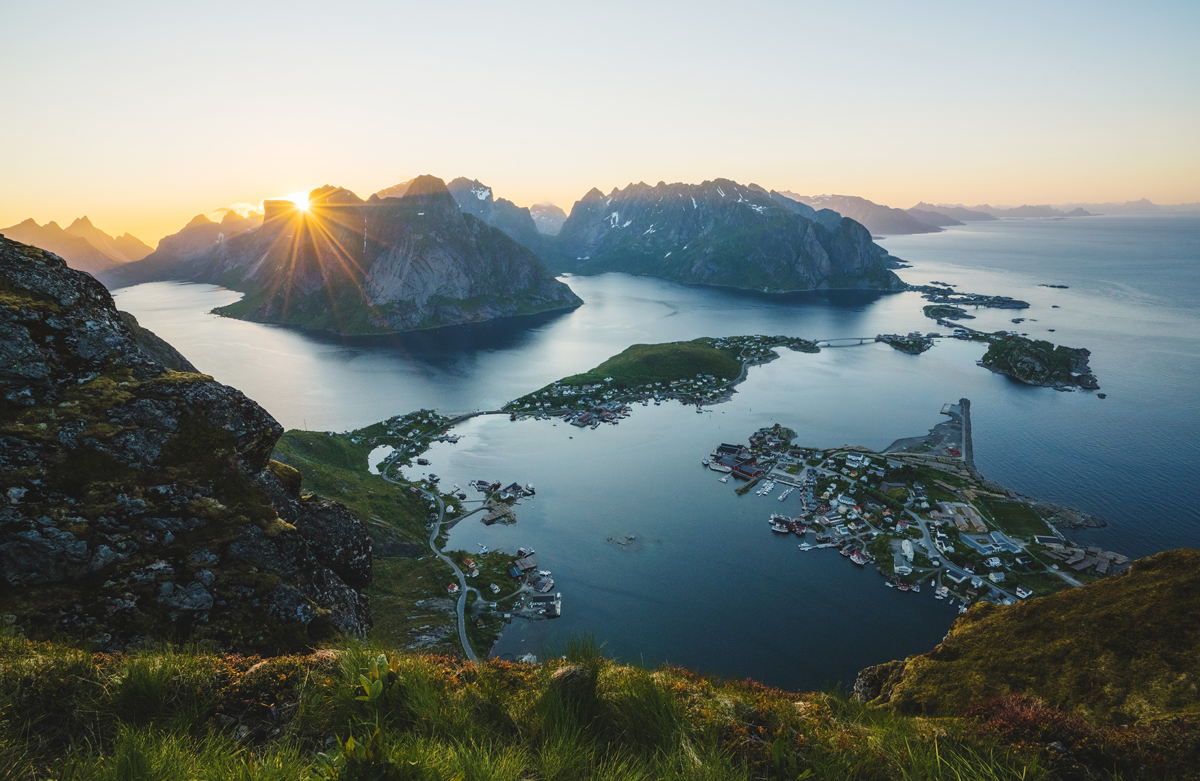 But worth the hike for us and we had, at around midnight, the most epic view ever!

Our Journey goes on till the south of Norway at the famous Trollstigen.

A road that sneaks and winds up the hill like made from trolls.

On Top there is a great new viewing plattform and you get a perfect view over the valley. It’s such a great area around there. Tons of waterfalls, the road itself, mountains, lakes, forest…crazy. 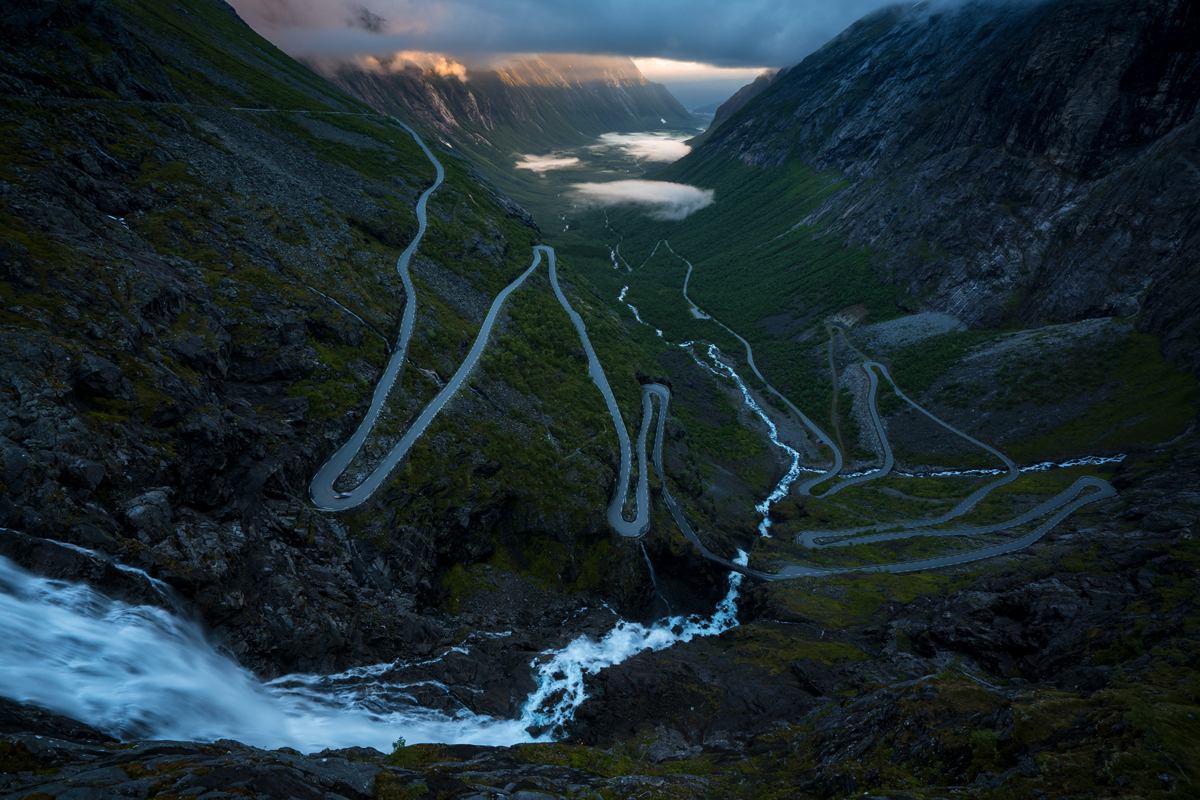 We photographed there the whole night and next day.

Our last stop is Geiranger Fjord. One of the most beautiful Fjords in whole Norway. Crazy Water Color, steep cliffs and again: Tons of Waterfalls. Here you can spend some great days and we did too.

Weather was great, Camping Side was great, Location was great: Jaworskyj is Happy! 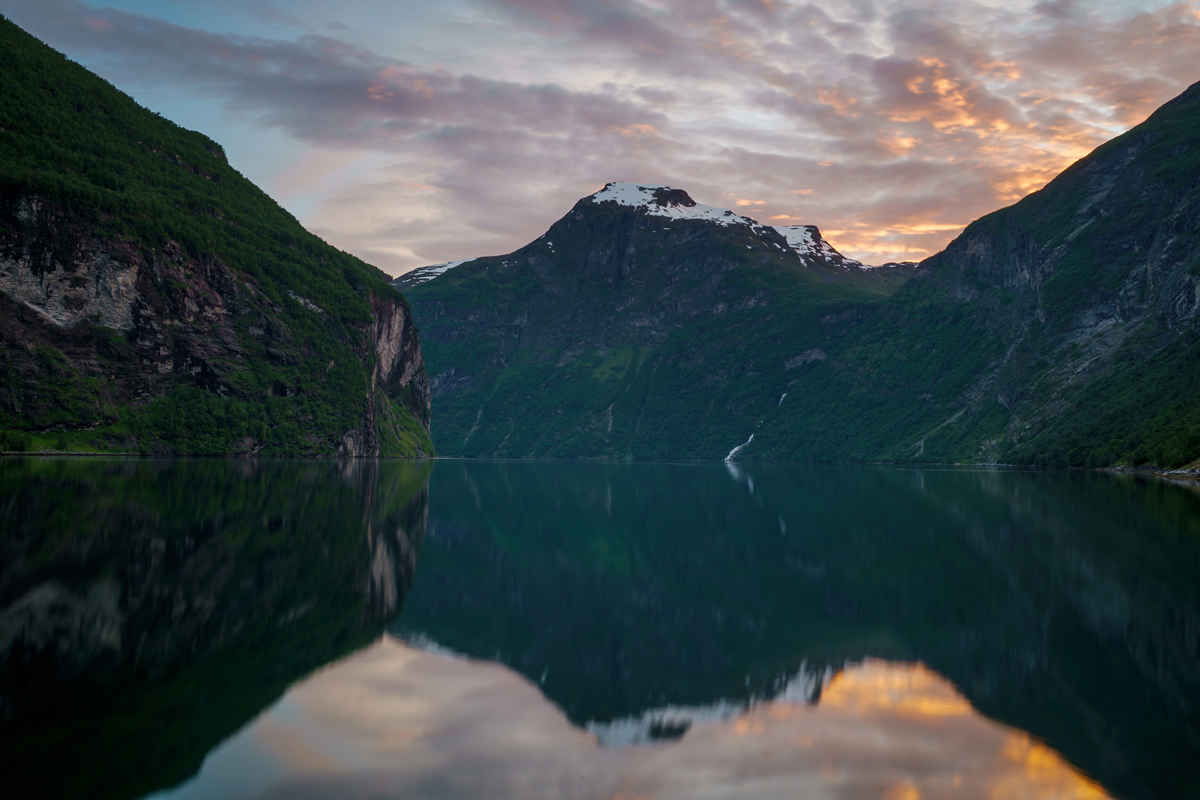 All in all it was an amazing expirience, but on the other hand pretty exhausting, espeacially with ongoing rainy weather at around 10°C (which was at least 1/3 if not half of the trip)

I can definetly recommend to start an adventure in those northern european countries. They are amazing for nature lovers and photographers.

I think Norway is better to fly to the area where you want to stay and rent a car there, because distances there are crazy long, with curvy and slow roads.

Sweden is great to camp especially the northern area. Very wild and remote.

Equipment that I used for photographing and filming

The * marked products are Affiliate-Links. When you buy something over those links I get some small amount for that. The price does not change for you or gives you any disadvantage. 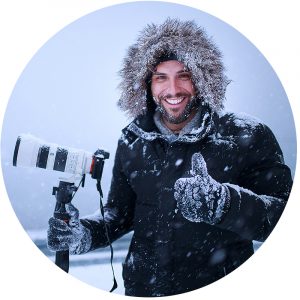